Racist behaviour is illegal and should be stopped regardless of what state the victim is in.

When Fabrice Muamba collapsed during a recent match one jerk, named Liam Stacey, started tweeting racist abuse. Muamba wasn't aware of this, as he was unconscious and being resuscitated. However, the judicial system rightly saw this racist behaviour as worthy for the perpetrator to serve time in prison.

However, when a young black person was stopped by the police and racially abused, and recorded that abuse, the Crown Prosecution Service deemed it unnecessary to bring any charges against the police officer because the victim didn't suffer any distress from the racist behaviour. The guardian reports how the officer threatened the victim and used racially abusive language, just like Stacey above, but how the CPS deems it unnecessary to prosecute. http://www.guardian.co.uk/uk/2012/mar/30/police-racism-black-man-abuse

So, Muamba can be unconscious and the courts can sort out the racist behaviour in 2 weeks, but a guy can be physically assaulted (he alleges he was strangled and the officer admitted to it on a recording taken on a mobile phone).
What is the difference? Why does the CPS seemingly protect frontline officers who abuse the public? What is the agenda here?
What difference does it make if the victim is distressing or not? Racist behaviour is illegal and should be stopped regardless of what state the victim is in. 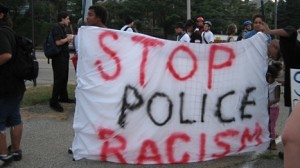