Solidarity for those on strike today

Not many people would know it today, as the media has not really picked up on it (apart from the Guardian) - but teachers in London were on strike today. They are asking for their pensions to be protected as they are well funded and the current coalition government has refused to carry out a review of how well the pensions are funded, which should happen every 4 years.
Whilst parents will be annoyed that their children have had to have a day off, would they support a reduction in their own working practices, or would they fight for what they agreed to when they started the job?
What is more, this government wants to 'reign in' public sector pensions to prevent rising costs to the taxpayer, but at the same time, offers a reduction in tax for those earning the most (the 50% rate). Why should hard working teachers, nurses, ambulance drivers pay up more for their pension, when the most wealthy in society are receiving a tax break?

Are we all in this together, or, has Cameron finally revealed the true colours of the Tory-led government? 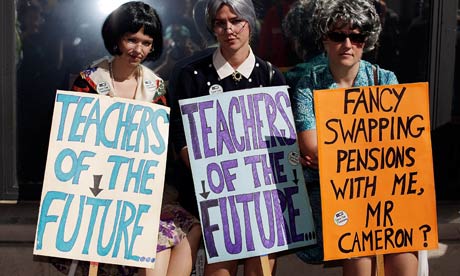